in stock
Product by: 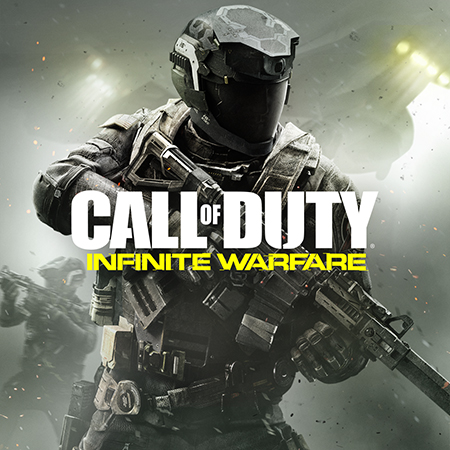 Call of Duty®: Infinite Warfare delivers something for every Call of Duty fan with three unique game modes: Campaign, Multiplayer, and Zombies. Delivering a rich and engaging narrative in a setting unlike anything to date in a Call of Duty game, the campaign is a return to the franchise’s gritty, military roots throughout new environments never before seen in the franchise.

The player will embark on a classic war story about grand scale warfare; all set in a grounded future where human conflict has spread throughout our solar system. Multiplayer brings ground-breaking gameplay innovations to deliver the deepest and most engaging Call of Duty experience to date. The title introduces stunning, never before seen, multi-planetary environments, new weaponry, and all-new player abilities to Call of Duty. In addition, the new cooperative zombies experience will thrill players with an original direction featuring fun and unique gameplay, all wrapped into an entertaining narrative sure to excite fans.

Welcome to Call of Duty: Black Ops III, a dark future where a new breed of Black Ops soldier emerges and the lines are blurred between humanity and the technology we created to stay ahead, in a world where cutting-edge military robotics define warfare. It is the ultimate 3-games-in-1 experience.

Call of Duty: Black Ops III combines three unique game modes: Campaign, Multiplayer and Zombies, providing fans with the deepest and most ambitious Call of Duty ever. The Campaign has been designed as a co-op game that can be played with up to 4 players online or as a solo cinematic thrill-ride. Multiplayer will be the franchise’s deepest, most rewarding and most engaging to date, with new ways to rank up, customize, and gear up for battle. And Zombies delivers an all-new mind-blowing experience with its own dedicated narrative. The title ushers in an unprecedented level of innovation, including jaw-dropping environments, never before experienced weaponry and abilities, and the introduction of a new, improved fluid movement system

A CALL OF DUTY CAMPAIGN TO REMEMBER

Call of Duty: Infinite Warfare puts storytelling front and center, in a deeply engaging narrative. It features jaw-dropping set-pieces and blockbuster cinematic moments, while also delivering a gripping portrayal of war that harkens back to the roots of the franchise. Infinity Ward also breaks new ground by thrusting the player into wartime leadership as Captain Reyes, a Tier 1 Special Operations pilot, who takes the helm of the Retribution, one of Earth’s last remaining warships. In a time of unthinkable hardships, Reyes must lead the remnants of coalition forces against a relentless foe in a war that spans our solar system

With Call of Duty: Black Ops III, Treyarch premieres a new momentum-based chained-movement system, allowing players to fluidly move through the environment with finesse, using controlled thrust jumps, slides, and mantling abilities in a multitude of combinations, all while maintaining complete control over your weapon at all times. Maps are designed from the ground-up for the new movement system, allowing players to be successful with traditional movement, as well as advanced tactics and maneuvers.

GEAR UP FOR INTENSE MULTIPLAYER

It’s an incredibly deep experience where everything – including weapons, equipment, lethals and tacticals – has been built around various, distinct types of play styles, and where players have the power to combine them however they want. Infinite Warfare also introduces the most advanced tools of war: Combat Rigs, high-tech equipment, and unique prototype weapons.

₦12,500.00
Add to cart
Due to fluctuating exchange rate, Our prices may change without notice. Always confirm price before payment. Thank you
close
Toogle Down
Our customer support team is here to answer your questions. Ask us anything!

Sales Enquiries
Available
Welcome To Amaget, how can we help?
Close
Sign in Or Register
x